LIFE AgriAdapt with the agricultural schools of Grand-Est region 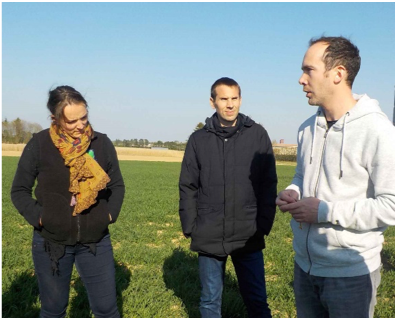 The managers of the farms belonging to agricultural schools of Grand-Est region were gathered at school of Châlons en Champagne last April 11th. It was an opportunity to exchange about climate adaptation issues from the example of the school of Somme-Vesle located in the North-East of Marne department. Since 2017, Solagro has carried out a climate vulnerability assessment as part of a European LIFE AgriAdapt project, which is experimenting more widely with this approach on a network of 120 farms in 4 different countries in Europe.

The climatic disturbances observed locally are multiple: trend reduction in the number of frost days per year, increase in the frequency and duration of dry periods, heat waves whose amplitude is surprising, or very intense precipitations combined with low radiation as in June 2016, resulting in the worst yields ever observed for decades on the farm, and more widely in the Champagne region (-50% for soft wheat, -60% for field peas).

The farm manager of Somme-Vesle explains the adaptation measures already implemented to achieve more resilience: the farm is composed of 240 hectares of soils with an important water capcity which limits the impacts related to water deficits. The rotation is made of 7 different crops (soft wheat, beetroot, dehydrated alfalfa, barley, rapeseed, protein pea, miscanthus), which help to spread climatic risks by getting stages of sensitivity over the whole cropping season. Great attention is paid to the choice of varieties for the main crops (resistance to cold, diseases), and their diversity (surface limited by variety) with the aim of complementarity to face multiple climatic risks.

Finally, it is possible to envisage mid-term further adaptation measures: choosing crops according to new criteria such as shrivelling whose intensity will increase in the near future, mixing several varieties at plot level, or anticipating the introduction of a new main crop as a progressive substitution for field peas which may be regularly over-impacted by high temperatures during the flowering period.