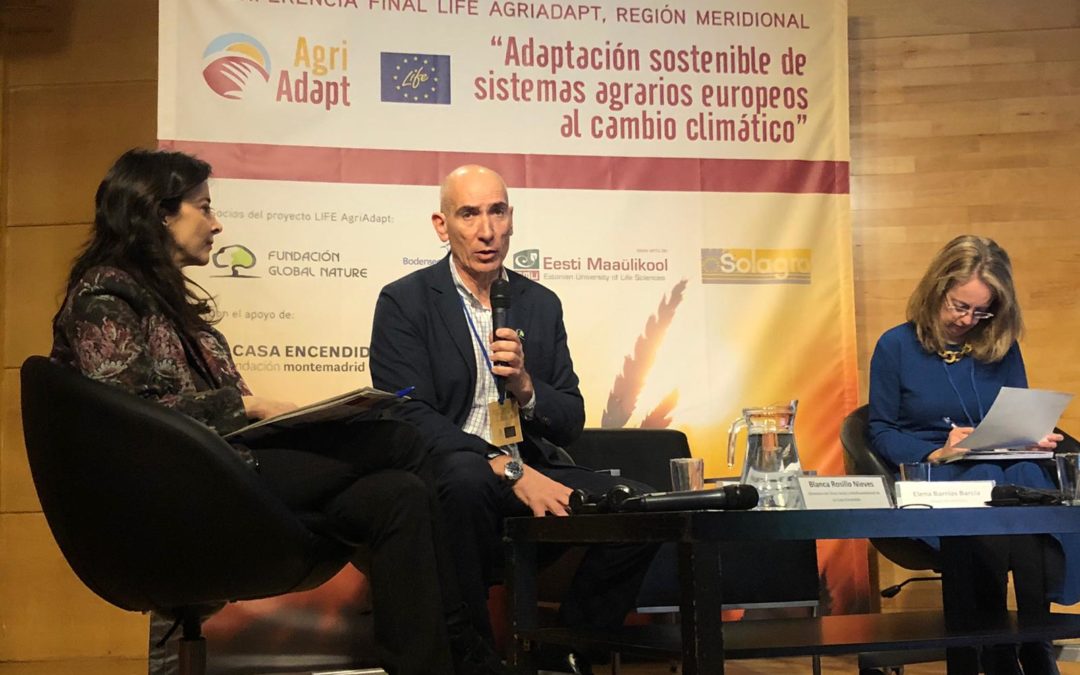 After four years of work, Fundación Global Nature presented the results of the LIFE AgriAdapt project for the Southern Region during a conference organized in Madrid on the 21st January 2020. More than 90 professionals attended this event, including representatives from the Directorate-General for Agriculture and Rural Development (DG Agri) and the Directorate-General for the Environment (DG Env) of the European Commission, representatives from the Ministry of Agriculture, Fisheries and Food of Spain (MAPA), scientists, farmers and farmers’ unions, as well as many other entities.

As the director of Fundación Global Nature, Eduardo de Miguel, exposed during the opening, “adaptation to climate change has to be local, according to current researches, and that is why the results of the LIFE AgriAdapt are the perfect tool to link this risk and local adaptation with the policies developing from the future CAP”.

For this local adaptation, the ACZ Tool (AgroClimaticZone Tool) was presented. This instrument was developed within the frame of the Project and is able to assess the climatic risk in grids of 25×25 km for the near future, identifying the main Agro-Climatic indicators and their trends. Also, the simplified online tool (AWA) was tackled, a tool which will be available for free in order to carry out these assessments easily, offering preliminary adaptation solutions to increase the resilience of European farms.

Among the presentations of the event, adaptation experiences from other projects in Portugal and Greece were also shown. This provided a broader vision to the public of the scenario for adaptation in Southern Europe.

All the attendants received a copy of the Farming & Adaptation Manual as well, which comprises the main results of the project pilot farms and that can be downloaded in the section “Documents” of this webpage. In this way, the transfer of knowledge and results acquired during the project was ensured.