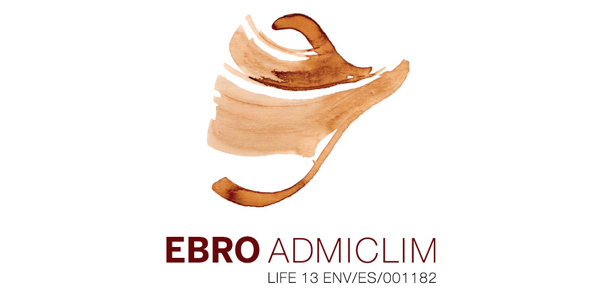 The LIFE EBRO-ADMICLIM project proposes pilot actions of mitigation and adaptation to climate change in the Ebro Delta (Catalonia, Spain) – an area vulnerable to sea level rises and subsidence. It proposes an integrated management of water, sediments and habitats (rice fields and wetlands) with the following multiple objectives:

In other words, the aim is a combined management of the inputs of inorganic matter (sediments) and organic matter with the objective of optimizing the processes of vertical accretion (soil formation) and organic matter decomposition (GHG emissions) in the rice fields and artificial wetlands. This approach has never previously been carried out in the European Union and is clearly innovative on a worldwide scale.

The principal pilot actions of adaptation are focussed on transferring sediments from the river Ebro to the Delta. The aim is to demonstrate the viability of restoring sediment flow permanently, from both the CAT (Consorci d’Aigües de Tarragona, Tarragona Water Consortium) water treatment plant and from the reservoirs on the lower stretch of the river. To this end, we first need to carry out a good assessment of the transportation capacity of the river and canals.

The pilot actions in the rice fields and wetlands are aimed at optimizing GHG emissions, carbon and nutrient sequestration and increasing the ground level of the Delta.

The results will be used to draw up the directives of the programme of mitigation and adaptation measures, with emphasis on the rice production sector. Improving the GHG emission and carbon sequestration rates via a change in management practices (for example, a more efficient water use management) can represent a significant improvement which could be applied to other wetland and rice cultivation areas in the European Union.

The Ebro Delta is an internationally important wetland area. It is considered to be one of the coastal ecosystems most vulnerable to the effects of climate change in the Mediterranean and in the European Union. At present the Delta is experiencing a loss of wetlands and rice fields due to coastal regression, caused by the lack of input of fluvial sediments – which are retained by the river dams along the Ebro basin. The coastal regression is greater than 10 meters per year at the river mouth, where 150 hectares of wetland were lost between 1957 and 2000. This problem is augmented by the reduction in the average elevation or height of the Delta, due to the rise in sea level and subsidence affecting the Delta. Around 50% of the Delta’s surface area could be affected by this phenomenon during the 21st century. The rise in sea levels is accelerating because of global warming and, taken together with the lack of sediments, this has a huge impact which threatens the survival of wetlands and a large area of the Delta. This threat is in fact a worldwide one, affecting river deltas around the globe – areas with a large amount of protected wetlands and home to a significant proportion of the world’s population.

Both coastal regression and elevation loss can only be compensated for in the long term by measures aimed at recovering the input of inorganic river sediments and the generation of organic matter in the wetlands and rice fields. These natural processes can be optimized through innovative techniques of environmental engineering. The typical policy of coastal adaptation via the construction of dykes and the installation of pumping to carry out polderization (drainage) in the Delta has high economic costs (including carrying out the initial projects and their maintenance) and causes a significant environmental impact (subsidence, salinization, deterioration of the wetlands etc.). The increasing rate of sea level rise also means that this strategy will be unfeasible in the mid and long term.

Within this context the LIFE EBRO-ADMICLIM project will allow for the development and application of new adaptation strategies to cope with this elevation loss caused by sea level rise and coastal regression in the Delta wetlands. Furthermore, the adaptation measures will be combined with mitigation measures designed to reduce the emissions of greenhouse gases (GHG) and increase the amount of carbon stored in rice fields and wetland areas. In this sense, the management of soil organic matter is an important tool for both adaptation (through carbon storage and raising the ground level) and for mitigation (through reductions in GHG emissions).

Agriculture practices make up between 10 and 12% of the anthropogenic (human-produced) emissions of greenhouse gases worldwide, but this can be reduced by altering farming practices to increase the amount of soil organic material and/or reduce methane (CH4) and nitrous oxide (N2O) emissions. Rice cultivation is especially significant as it is the second most widely-cultivated plant worldwide – a staple food for 50% of the world population, and one of the largest anthropogenic sources of methane. A recent study estimates that increases in carbon dioxide (CO2) and in predicted temperatures by the end of this century will double the greenhouse effect on rice fields, and points out the need for management measures which optimize rice production practices and reduce the intensity of GHG production.

There is very little data regarding GHG emissions in Mediterranean rice fields, with only a few studies available. The Catalan government estimates that the annual emissions in the Ebro Delta could reach 82,000 tons per year (t/year) (CO2 equivalence). 52,000 t of these would be CH4 while N2O would make up the remaining 30,000 t. However, this estimation is based on models and has not been verified via field studies as the relevant data does not exist at present.

The European Union finances the application of agri-environmental measures in the Delta rice fields which include, among other actions, extending the period during which the rice fields must remain flooded after harvest-time. This process offers benefits for aquatic fauna but its impacts on GHG emissions is unknown, whereas this factor could be optimized if environmental management were more focused on this objective – without affecting biodiversity. A good assessment of GHG emissions as a function of agricultural practices (water management, stubble management, etc.) on pilot plantations is essential to set up future voluntary plans for the reduction of emissions in rice farming.